Search Results for: windows on eee 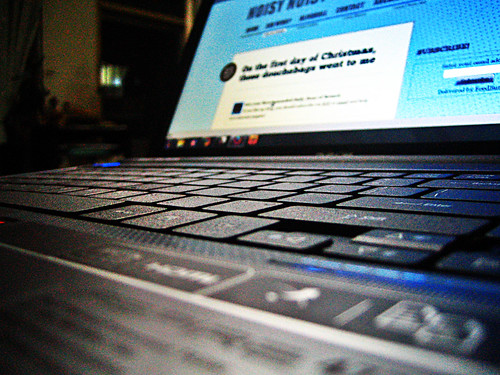 As I posted on my personal blog, I bought a new Acer Aspire 4736ZG. Aside from getting myself acquainted with Windows 7 (I love it to bits), I’ve spent the better half of the holiday weekend tweaking it. I’ve installed my favorite programs I use on my old netbook, while at the same time I’ve uninstalled a LOT of OEM bloatware that came with the computer. Why OEMs like Acer like to ship in unnecessary programs that can sometimes even slow down performance is beyond me. END_OF_DOCUMENT_TOKEN_TO_BE_REPLACED

If you haven’t heard yet, Firefox 3.6 Beta 1 is now available for download. To be honest, I’ve stayed away from Firefox for some time now because of the darned 3.5 version. It’s just too crash-happy on my Asus Eee PC.

I’m using it, and so far so good. Firefox 3.6 Beta 1 incorporates the following new features:

Web developers and Add-on developers should read more detail about the many new features in Firefox 3.6 for developers on the Mozilla Developer Center. For the full list of changes since the alpha release, see this list (it’s big).

Since this is a beta release, the usual caveats apply of course. For those using netbooks, how is Firefox 3.6 Beta 1 doing so far for you?

If you don’t know, I’m a netbook guy. I go about my daily tasks all over the metro carrying my trusty Asus Eee with me, and when I find a nice (hopefully free) wifi hotspot, I sit down, grab a mug of hot coffee, and work away. But if I’m lazy to bring my netbook with me (admit it, even netbooks CAN get cumbersome at times), I have my trusty Nokia E63 always in my pocket, so if I need to make a quick Skype call, update Twitter, or check what my friends are up to in Facebook, it can suffice for my needs. END_OF_DOCUMENT_TOKEN_TO_BE_REPLACED

ASUS is intent on maintaining its league-leading position in the netbook sector by adding more features to its Eee line of products.

ASUS has announced that it will be adding HSUPA 3.75G technology to the Eee line beginning October. The first product that will get the new tech is the Eee PC 901. Although no price was announced for this new iteration, the 901 will be available in both black and white. There were also no announcements whether the 901 will be partnered with any wireless supplier.

Finally, after badgering computer stores and even online retailers, I got my hands on an ASUS EEE ultraportable laptop. It’s the best purchase I’ve made in the last two years, even beating my purchase of a Nintendo Wii just a couple of months ago.

I just love how light it is. It is relatively feather light compared to my very heavy Acer laptop. It’s so small that I can actually use an old leather organizer I have and use it as a cover for the EEE. It actually looks like I only carry a planner when I’m out. It’s that small and light.

The Xandros OS is something that I have to really get used to. I still don’t even know how to install programs or even format a USB drive. But as a handy workaround, I’ve also installed Windows XP using an 8GB SDHC card, which means I can dual boot between Xandros and WinXP whenever I want to. Who would think that a machine as small as this one with slightly compromised specs would be such a robust performer?

I am now saving up so I can buy my wife the green EEE that she wants for her birthday. At the rate things are going I might even buy my three year old son an EEE just to give him an early taste of technology and how to love it.