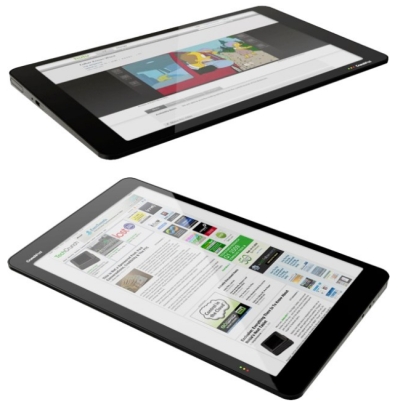 So the world waited with bated breath this November for Michael Arrington’s much-awaited $200 internet tablet, the Crunchpad. And it never arrived. In fact, the way it just disappeared from the zeitgeist made people speculate about its premature demise.

Well Arrington came out and said that no, the CrunchPad is not dead. In fact, it’s going to be out sooner or later and it’s going to cost between $300-$400, with sponsorship (probably like Google sponsoring Firefox by being its default search engine). END_OF_DOCUMENT_TOKEN_TO_BE_REPLACED

Via Technologies recently released its new Surfboard design, this is a reference design for low cost netbooks. Via’s design will run directly against Nvidia’s own Ion platform.

The Surfboard, though containing an older C7-M ULV microprocessor, is also built around the VX855 unified chipset that Via also introduced last week. The VX855 has capabilities to play 1080p videos while only consuming less than 40 percent of the CPU. This HD playback capability is also one of the features of Nvidia’s Ion. Surfboard is planned to be used for netbooks with displays between 10 to 12 inches. Surfboard will also have support for Bluetooth, GPS, WiFi and 3G.

Zero1, a new mobile phone carrier has announced that it will begin offering unlimited voice and data on smart phones for just $69.95 a month. The offer is made without a contract and riding on a network that is as wide as the one operated by AT&T because it will, in a way, be using AT&T’s network through some form of roaming agreement that will allow the transmissions to tunnel from AT&T’s network to Zero1’s IP backbone. .

Most of the savings that Zero1 will enjoy is by removing traditional circuit switched voice calls. All of the calls on their network will go through their own VOIP application. Currently this only runs on Windows Mobile 6 phones but in the future it will also work for Blackberry, Android, Symbian, JAva and even iPhones.

The $69.95 a month plan will include VOIP calling and data, and will be done every month without a contract or credit check. An additional $10 a month, users can enjoy unlimited international calling to 40 countries.

Micron has recently revealed that it has begun “sampling” both 8 and 16 gigabyte block abstracted NAND flash.

The new flash products will begin shipping sometime during the latter part of 2009.

For many people, block abstracted NAND flash is too technical a term to really understand. Simply put, block abstracted NAND flash is flash memory that has its own optimized memory controller. This means that third party designers won’t need to design or include their own flash controller. This ultimately saves in design cost and space. The integrated controller in the NAND flash will also have its own wear levelling algorithms that allocate the blocks of memory that are written and rewritten, which will also result in savings and a better integrated design for flash based devices like MP3 players. Everybody wants the latest gizmos and gadgets in their digital arsenal which goes the same for cell phones and other electronic gadget they can stuff into their already bulging pockets. Cellphones have become so popular more of us have them than computers and they are indeed one of the most prolific pieces of technology the world over. May it be in developed countries to less developed ones, cell phones have brought communications to the masses. From the big man himself to the guy who works in the sewers of India, all are sure to have one in their pocket ready to make and receive calls anywhere anytime.
With so many choices, people get vertigo just going to the shop figuring out which model to choose which depends on your needs basically. For one, younger people tend to get the ones with the most features packed into them. From browsing the net to playing their favorite MP3’s or geo-tagging their photos with their mobiles, they can quite do almost anything.
The President’s blackberry which he battled to keep amidst many a complaint from security experts is testament to how much we love these gadgets. Choosing one that fits your lifestyle may be your best bet for a good and up to date phone that you can even get for free if you get the right package/plan. They do get old quite fast for new models come out every few months or so. You can even donate your old phone to the many charities and recycling organizations who can put themto good use.