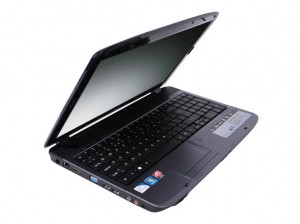 Honestly, I don’t know what to make of it. It seems that Acer has come up with a laptop that has a 3-D display effect. The 3-D effect is achieved by a transparent polarizing filter overlaid on the screen, which splits images into separate streams for each eye. You would need a pair of special polarizing glasses to get the effect, and if you look at the screen straight-on, you’d get the 3-D effect. Looking at the screen at an angle may actually not show the 3-D.

According to The Times Online, the 3-D “results range from stunning to not so good.” So far, the videos that look best apparently are the ones already saved on the hard drive to begin with. You know, trailers and animations. You can download new videos, but I’m suspecting the ones especially made for 3-D will work best. That means that episode of Glee you downloaded off a torrent site won’t definitely produce the best results. Gaming on the other hand, would work better, although The Times Online reports that they can be blurry at times.

Now I won’t go all skeptical on this one and say that 3-D is just going to be a passing fad, because I really can see that this is going to be the future. We probably won’t see it in a while, but this technology is going to be adopted and 3-D will be a standard. But until then, I’d advise you guys to stay away from it until we get TV shows, movies, and games that won’t give you a headache after viewing it in 3-D.