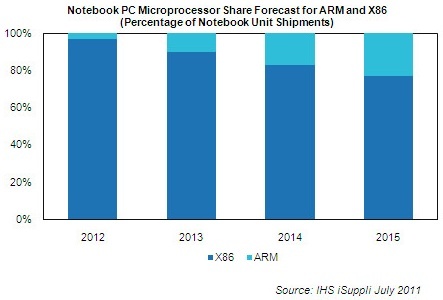 Love it or hate it, but Windows is still the most used operating system around the world. Reasons range from convenience to price to habit to loyalty, but if rumors are to be believed, there is another reason for people to continue patronizing Bill Gates’s major software product. In the foreseeable future, we are going to see the launch of Windows 8. And while countless people are too focused on the launch of Apple’s Lion (and the MacBook Airs!) today, there is no doubt that when the time comes, Windows 8 will get its fair share of coverage.

More than the operating system, though, the rumors are also highlighting a probable consequence – the boom of a new breed of low cost laptops. No matter how you look at it, price is always a prime consideration for many buyers. We may all want the best specs, but sometimes, the price is a big hindrance.

So what is the link between the upcoming Windows 8 operating system and laptops that won’t break the bank? According to Matthew Wilkins, an analyst at t IHS-iSuppli, the reason is the ARM processors. By the year 2015, Wilkins says that around 25 percent of laptops will have the ARM processors. And guess what? Windows 8 is ARM-enabled.

Wilkins goes further and predicts that laptop manufacturers will jump into the bandwagon by making budget laptops using the new processors. By “budget” he means laptops priced below $700 – with a lot going as low as $500. While we do have these budget laptops today (at least based on the price alone), the major difference is in the processor. If – or maybe when – laptop manufacturers start using ARM processors instead of the current AMD and Intel ones, then we might just have more options for laptops that will free up more cash for other expenses.

I am not too sure about the cause and effect situation as described by Wilkins ((Source)). Is the predicted rise of new low cost laptops (running on ARM processors) because of Windows 8, or is Windows 8 going to be more popular because of the ARM processors? Maybe it works both ways, or maybe I am missing something. In any case, the most important thing is that more budget laptops are in our future.