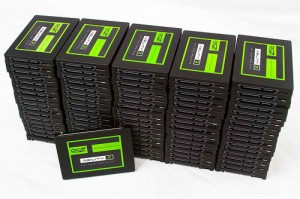 You have probably heard about solid-state drives, and you may be wondering why there is so much buzz about them. In one word, the answer is speed, but you were probably hoping for a little bit more.

What Is an SSD?

When it comes down to it, solid state drives are effectively a big USB pen with a different connector. Internally they are organised differently and are faster, but ultimately they are a lot of memory in a box. Almost universally, they are designed to fit into a standard laptop computer as a direct replacement for the existing drive. Adapters are also available to fit them into desktop systems. You can then install the operating system of your choice and away you go.

What Do They Cost?

At the moment, SSDs are more expensive than traditional spinning platter drives. They are one of the “must have” hot items and, as such, prices vary a lot, but are falling faster than their HDD counter part. Many stores are also offering additional discounts beyond just lower prices. Finding a TigerDirect or Newegg promo code, to save more money, should be a snap. They also tend to be smaller than traditional drives. While the old style drives are ranging up to the 500GB-750GB range a typical SSD will be 120GB-250GB.

Why Will an SSD Improve My Performance?

With a traditional spinning platter drive there are three factors that are involved when you ask your PC to open a file. The first is Latency. This is the time for the disk to spin around and place the data you want underneath the read/write head. The second is Seek time. This is the time for the head to position itself over the track containing the data. Seek and latency can happen together to help reduce this time. The third time factor is the time taken to read the actual data itself. In an SSD the first two items are eliminated altogether, and you just have the read time. Given the nature of SSDs, the read time itself is also considerably reduced. The benefits are also greatly magnified because on a traditional drive this process often has to be repeated many times for each file, especially if you have not defragmented for a while.

How Much Will an SSD help?

In a modern computer, the main bottleneck to performance is not the processor but the time taken to get data from the drive for the processor to work on. It is like having a car with a massive engine but skinny little tyres. You will never get to use all the power you have. Boot times can go from 40 seconds to less than 10, and launching Photoshop can go from 55 seconds to 12. These improvements were achieved by changing nothing but the traditional drive for an SSD.

If you have an old laptop that could do with a midlife kick or a newer one that just is not performing as fast as you like, why not consider a SSD as your next upgrade?
Kevin Humble has worked in I.T. for over 30 years ranging from mainframes up to modern P.C.s and pretty much everything else in between. He has an evangelical passion for all things technological.