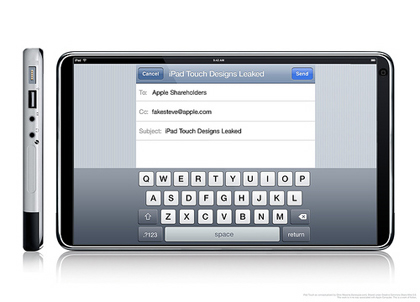 Apple fanboys have been clamoring for it over and over again: “give us a tablet, for crying out loud”. We all know that the iPhone or an iPod touch doesn’t compare to a full Mac OS X experience.

People were looking for the closest thing to an Apple tablet, and the CrunchPad came out. Oh wait, it didn’t. It got killed before it even came out, and is now being sold under a really meh branding. “Joo Joo”? Really?

Anyway, it’s reported that Apple rented the stage at t the Yerba Buena Center for the Arts in San Francisco for late January.

While both Apple has made no comment about the event, sources familiar with the event say that Apple plans to make a significant product announcement early next year.

The device is expected to be announced in January, where it will then go into mass production and be sold a later in the year. Very little is known about the device itself, but it is expected to have either a 7 or 10 inch screen. It is also expected to look like a blown up iPhone. It’s been reported as well that the tablet has been developed under the close eye of Steve Jobs himself.

Remember, it’s just a rumor, but who knows? I’m rather excited at the prospect of a blown-up iPhone working as an Apple tablet, running Mac OS X. Imagine what you can do with it. But then, I don’t remember a single tablet computer that did well. I can’t wait to see what Apple does with it and how they’ll redefine the market.