Back in 2006… it’s so funny to be saying that now since we’ve just barely come into the year 2007… the movie Cars by Pixar was released.

It’s a cute animated film about a hot-shot race-car named Lightning McQueen that gets waylaid in Radiator Springs, where he finds the true meaning of friendship and family.

It’s definitely a fun movie for kids but also for adults as well. Pixar is good like that adding in a little adult humor which can also be seen and heard in Pixar’s 1995 classic Toy Story. Yeah, Buzz Light Beer…

Anyway, I love animation and of course PhotoShop projects, so I went looking for some tutorials on how to take a picture of a real car and make it look like one of the cars from the Pixar movie Cars: 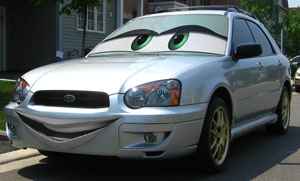 So if you’d like to learn how to do this, here is a link to the tutorial on making your car look like a Pixar Car. Enjoy!

Disclaimer: The car pictured above is not my own car but I’ll be doing a picture of that soon.