There has been a lot of buzz about the Four Hour Work Week. And to be honest I blew it off at the beginning and I still blow off a lot of it. But I’m trying my best to implement various things that I find useful. Mostly becoming more organized and more diligent to pursue hobbies outside of ‘work’ have become the center of my focus.

The Four Hour Work Week is a must read for anyone who wishes to travel and work on the road. Some of the resources Tim Ferris shares in the book are just amazing. My personal favorite is GetFriday. You can’t go wrong with a virtual assistant or two who can juggle two or three hats and focus on helping you build your business(es).

One of the things I have been pondering lately is the need to be always connected. I see a lot of people out there are getting iPhones, and I realized we are creating more and more of a society that is always online. And always reachable. You know what?

There is a good part of the time I just don’t want to be reachable. I want to be curled up listening to music and goofing around in Photoshop. I don’t know about you but I’d rather have a truck load of Moleskines and a walking stick than an iPhone and an always on world.

Contrary to many directories, and top lists, EatonWeb uses an algorithm based on over 20 different factors to track the metrics, strength and momentum of a blog and not just the number of pageviews. Elements of the algo are PageRank, traffic, incoming links, estimated number of subscribers, Alexa Rank and some more secret numbers. Weekly the values are updated and in every category fastest climbers and sinkers are listed.

Submission to the directory is free. EatonWeb is a manually edited directory, not a website-additional-directory serving some shady SEO wannabes free link juice and monthly income based on submission fees.
Go add your blog to the oldest blog directory on the internet and show off your blog strength. 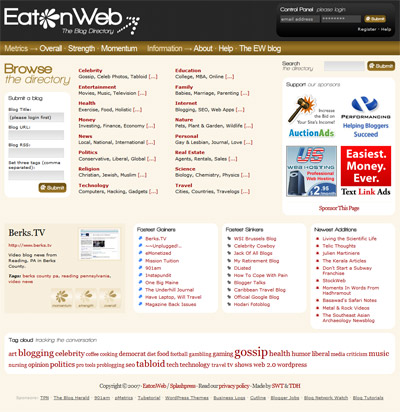 Hardly ever do I go somewhere without taking my laptop with me. When I want to have a break, but still be productive, I go to a bistro and luckily most bistros in my neighborhood offer wireless already.
But sometimes I’m on the road and no wireless is available. Sadly here in UK data plan flat rates only flatten your budget and not the road to being online anywhere (yet).
This means that sometimes I end up in locations without internet connection. I am sure the thought of this alone already scares many among you, but let me tell you, there’s life… even without direct internet connection.
And with little preparation and some (offline) tools you can perfectly continue working without losing your productivity. Actually some tools might even make you life easier.

Lets have a look at a list of 4 applications every web worker, problogger, designer who prefers classic bistros over Starbucks, professional who spends two hours or more daily commuting in a train compartment or traveler on a cruise ship, charged a whopping $15 for half an hour of internet connection, needs.

Right now this is everything I can think of, but I might add more tools as I discover new ones.
Of course the compulsary tools such as Notepad++, SmartFTP, the best free FTP client for private usage, and The Gimp/PAINT.NET/Photoshop, depending on your budget, also belong to this list, but they are more of general need IMO.

If you can think of any other tools, leave a comment. :)

We all knew it was just a matter of time. The almighty dollar always wins out in the end, no matter how principled an organization might seem to be.

Just look at the Catholic Encyclopedia. It’s one of the most well-respected sources of information in the world. But when you open up each of their entries, what do you see? A big ugly Google Ad staring you right in the face. It’s not subtle either.

Now if you had asked me 7 years ago which organizations on the web might avoid the temptation to uglify in the name of of revenue, I probably could have only listed a handful of sites. In December of 2006 there was really only one left on my list: Wikipedia.

But despite it’s unwillingness to uglify thus far, I’ve had an uneasy feeling in my stomach for some time, suspecting that eventually, Wikipedia too, would give in. Call me jaded or whatever. But the cancerous spread of uglification in the name of revenue has reached to the far corners of the web, and I couldn’t help but suspect that Wikipedia be taken in as well.

So it came as no surprise when Jimmy Wales recently hinted at Wikipedia’s move towards a revenue model, in the name of charity!!! According to Reuters in an article entitledWikipedia founder mulls revenue options:

Wikipedia … could veer from its no advertising policy in the future to raise cash for charity.

Now, we should be clear that Jimmy Wales tries to underplay this development by emphasizing “for charity” and by suggesting that they may first try to monetize in non-advertisement via quizzes and trivia games. But let’s not mince words here. This is Wikipedia clearly setting the table for advertisement uglification. After all, do quizzes and trivia games really have the potential to raise sizable amounts of revenue for charity? If Jimmy really wants to help the kids in Africa, as he says, then just plop some AdSense down and you’ll have millions within days.

We know you’re going to do it Wikipedia. Everyone else has.

Everyone who discovers this WordPress plugin loves it.

I’ve been using it for about 8 months now, but haven’t taken the time to announce it publicly as my favorite WordPress plugin.  You know, the one plugin that I install on every WordPress installation (the only one beside Askimet that I actively use on each blog).

The plugin is called WP-ShortStat.  It’s a brilliant, simple little stat program that shows you everything you want to know about your blog visitors.  Here’s a sampling of what it shows you:

All of that on one single page.   Want to track your most recent submission to Reddit or Digg?  WP-ShortStat gives you an almost real time picture of not only your most recent visitors, but the precise minute during which they visited.  This allows you to see the volume of traffic at any given moment.  Very cool indeed.

There is one caveat to all this.  WP-ShortStat is database intensive.  If you’ve got a consistently high-volume site, and you notice that WP-ShortStat is taking minutes, not seconds to load, then it’s time to uninstall the plugin!