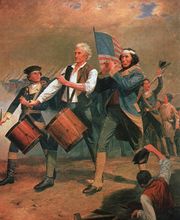 The United States celebrates its Independence Day on July 4, a day of patriotic celebration and family events throughout the country.

In the words of Founding Father John Adams, the holiday would be “the great anniversary festival. It ought to be commemorated as the day of deliverance… It ought to be solemnized with pomp and parade, with shows, games, sports, guns, bells, bonfires, and illuminations, from one end of this continent to the other, from this time forward forever more.”

I totally agree with you John Adams, so today I plan on celebrating our independence with good friends, good food on the BBQ, loud music, maybe a game of Scrabble and lots of fireworks exploding high into the sky.

The picture above was originally entitled Yankee Doodle, this is one of several versions of a scene painted by A. M. Willard that came to be known as The Spirit of ’76.

You pumped your fists when they rocked. Your heart pumped full of love when they broke out these sweet ballads. Go ahead, shed a tear or two.

That’s the introduction on the liner notes on the CD that I picked up yesterday titled “The Greatest Hits – Power Ballads” from my local Target.

The CD was only $8.99, so it was well worth the cash to have some songs from days gone by in my music collection.

I just finished listening to all 12 tracks straight through this afternoon while I was driving around. The songs brought back so many memories from high school and from when I was in a metal band. Good times indeed. 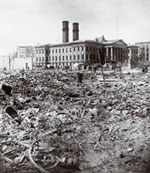 This morning I received an email from a friend about the most destructive earthquake in American history that shook San Francisco at 5:12 am on April 18, 1906 and how it effected the U.S. Mint located within the city limits.

This is a really interesting story. I love history and I’m sure that’s why he sent me the link.

There is even talk about making a pilgrimage to San Francisco for the reopening of the mint in a few years. Road Trips are always fun.

Here’s a link to the Full Story by Michael Castleman on the Smithsonian Magazine website.

If someone would have presented an XBOX 360 for me and my friends 20 years ago, I’m pretty sure we probably would have fainted. When you compare similar games from the mid-eighties with today’s top notch video and computer games, the difference in graphics is quite amazing.

Here’s an interesting comparison of 5 games from the 80’s with todays killer games:

I still love the classics. Time to blow the dust off my Nintendo. Ah, 8 bit graphics. The good old days :)