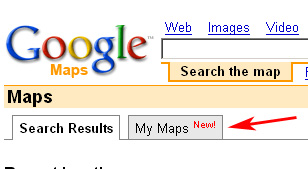 Google Maps has become even more customizable. Now when using the service, users have the choice of personalizing and sharing their maps. A new tab located next to your search results give users an array of tools that lets you mark a place, section off areas with the shape tool, create custom directions, as well as add text, images and even video. Logging in with your Google account will allow for everything to be saved and shared with the people of your choice. seroundtable.com has a great review of My Maps with images showing how to use all the new features.

Google Pack Beta comes in 12 languages. It runs on Window XP and Vista and supports Internet Explorer 6.0 and Firefox 1.0 and above.

St. Patrick’s Day is here and of course Google gives us a holiday logo with an Irish twist:

St. Patrick’s Day wouldn’t exist if not for the man himself! But how much do we know about him?

Did you know that he spent six years of slavery in Ireland until he escaped and undertook religious training abroad?

Saint Patrick is believed to have been born in the late fourth century and is often confused with Palladius, a bishop who was sent by Pope Celestine in 431 to be the first bishop to the Irish believers in Christ.

Saint Patrick was the patron saint and national apostle of Ireland who is credited with bringing Christianity to Ireland.

For me it’s the one day a year that everyone likes to pretend they’re Irish, so they can get drunk and be extra obnoxious on a weekday.

You’ll see the occasional “Kiss Me, I’m Irish” pin on the lapels of co-workers and sales clerks. The better looking they are, the less they actually want you to try and kiss them. Believe me.

People like to wear green on this day, too. I don’t. I have nothing against it, I am Irish, but don’t feel I have to be involved.

I figure having a name like “Sean” excludes me from trying to be Irish (or “fake Irish” for the day). The only name more Irish than mine is “Irish O’Irishson” and he’s a jerk.

Anyway, have a nice day, drink lots of Guinness and for those of you on a mission to get lots of kisses, I send you a little Irish good luck.

Could Google be looking to build or design a wireless mobile phone?

This job posting titled “Analog Designer/Engineer” would lead me to believe Google is at least considering it.

According to the job posting (copied here for archive purposes):

Google organizes information and makes it accessible and useful. To improve accessibility, Google is experimenting with a few wireless communications systems including some completely novel concepts.

We are building a small team of top-notch Logic Designers and Analog Designers aimed at nothing less than making the entire world’s information accessible from anywhere for free. Are you in?

Here is the list of skills and requirements that Google is looking for in a Analog Designer:

Although rumors of a Google phone have been circulating for quite some time, this is the best evidence so far that Google is really considering such a device.

You can bet we’ll hear more rumors about this mobile or wireless Google device in the next few weeks. Stay tuned, this rumor has a lot of potential.

This morning Viacom Inc. announced that it has sued YouTube and Google in U.S. District Court for the Southern District of New York for massive intentional copyright infringement of Viacom’s entertainment properties.

The amount of the lawsuit: $1 billion in damages. Yikes!!

The lawsuit accuses Google and YouTube of “massive intentional copyright infringement” of Viacom’s entertainment assets and seeks an injunction against further violations.

According to the complaint filed by Viacom, almost 160,000 unauthorized clips of Viacom’s programming have been available on YouTube and that these clips had been viewed more than 1.5 billion times.

Check out the Viacom press release for more details.