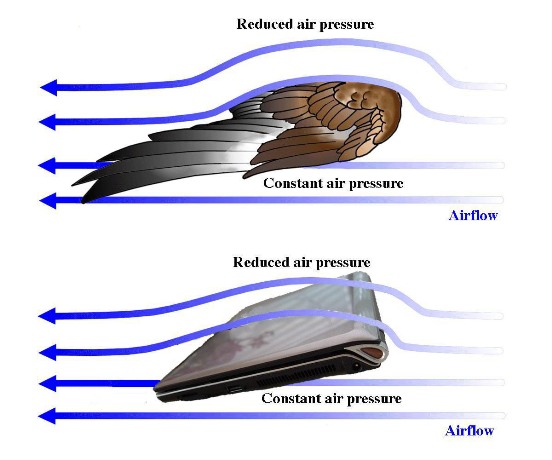 I never knew wind resistance wasd a big factor in netbook design, but I guess when you’re travelling and you keep your netbook in front of you, the less wind resistance you get the better. END_OF_DOCUMENT_TOKEN_TO_BE_REPLACED

I was quite surprised when I read this bit of news today.

The state government of Illinois has recently declared that Pluto is a planet. The resolution was a way to sidestep the recent ruling of the International Astronomical Union that reclassified Pluto as a part of the Kuiper belt, removing it from the list of planets.

The specific decree reads as “RESOLVED, BY THE SENATE OF THE NINETY-SIXTH GENERAL ASSEMBLY OF THE STATE OF ILLINOIS, that as Pluto passes overhead through Illinois’ night skies, that it be reestablished with full planetary status, and that March 13, 2009 be declared ‘Pluto Day’ in the State of Illinois in honor of the date its discovery was announced in 1930.”

A big reason Illinois is desperately fighting for Pluto’s “planetary” status is because the man who discovered Pluto in 1930, Clyde Tombaugh, is an Illinois native. Having said that I still find it quite hilarious that whenever Pluto passes over Illinois it goes from a part of the Kuiper Belt into a full fledged planet. They should’ve also changed its name from Pluto to Schizophrenia.

I just have to blog about this.

For all of the efforts of record companies to stop mp3 downloads from happening sometimes they can also shoot themselves on the foot. Take for example the new album by megaband U2. The band’s No Line on The Horizon is probably one of the most anticipated albums this year and the buzz for it is just insane but it all it took was Universal Music Australia’s decision to release the album through its website two weeks ago to help proliferate the album through the net like a virus. By the time the company decided to remove the files from its site it was already too late, digital copies of the album are now being spread in various torrent sites.

I don’t think it will affect sales though. It’s too good an album to just settle for a digital copy. My preorder for the limited edition boxed set is already set.

The Macbook Air is undoubtedly the world’s slimmest laptop. But this extreme portability may not be a good match for people who do not know how to take care of their things.

In a recent column, Steven Levy, a columnist of Newsweek, showed exactly why ultraportable gadgets and being a slob do not make good bedfellows. Levy narrated that his expensive Macbook Air disappeared from his apartment and he couldn’t trace where it went. After scouring his place and even placing a call to an Apple representative (like they could help retrieve a misplaced laptop), he still couldn’t find it. He eventually deduced that it may have been inadvertently thrown away with a stack of newspapers that he was throwing away for recycling.

Hard to believe that a gadget worth almost two grand could be lost in that manner. But apparently it can happen. So let this be a cautionary tale to Macbook Air users or those who love buying those itsy-bitsy gadgets that electronics companies love to put out in the market.

I think it is safe to say that laptops are the new must-have, status symbol accessories. Forget about mobile phones, laptops are the new neck-turners. To prove my point, just go to any restaurant, cafe or coffee shop and I’ll bet the moment someone whips out a cool sub-notebook or the newest “IT” item from Apple and you’re bound to look at the person with envy or wonder how the hell he or she could afford such a great gadget.

I admit I’m one of those guys who can’t look at a new Macbook Pro or Fujitsu Lifebook without drooling. The bad thing is that I go all metaphysical because of it. I begin to wonder how THEY can afford it and I can’t. Am I destined to forever be relegated to the group of people who always have to settle for low-end or low-midrange laptops?

In my envy, I also start mocking these people. I look at the websites they surf (Ha! Plain old Yahoo! Entertainment. What a bore!) or even the kind of information that they look for (Beyonce! Josh Groban! What atrocious music tastes!). I know that I’m being unfair and that my desire to have a really cool laptop has made the worst come out of me. But I also know that I am not the only one who feels the same way. I guess the best thing to do about it is just ignore them, be happy with what I do have — and try to “accidentally” spill cafe latte on those damn Macbooks.